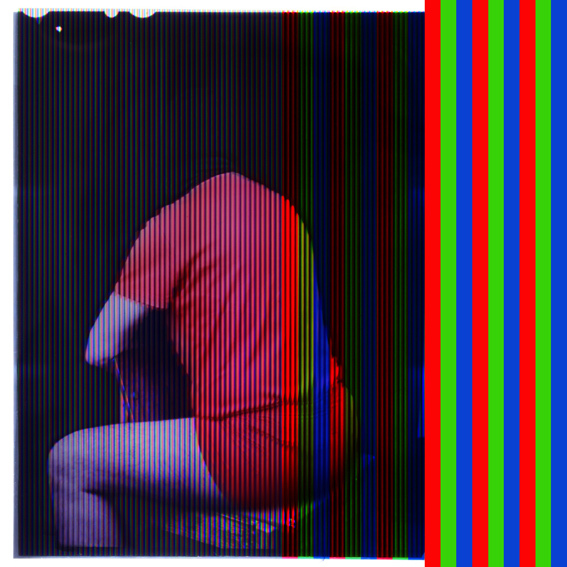 Alan Phelan has been working for the past three years on reviving the Joly Screen process, a forgotten colour photography process invented in the 1890s in Dublin. The Joly Screen image on show is from this new body of work which Phelan has recently begun to exhibit. The photograph comprises two parts – black and white sheet film and a colour screen made from red, green and blue (RGB) stripes. This is not a chemical process but instead filters light on exposure and display to create colour. Phelan’s practice is often site responsive and, for this installation in Temple Bar Gallery + Studios’ Atrium, the windows are striped in RGB to turn the space into a proxy camera body as well as creating a darkened space to view the internal window as a light box. The wall text is a lyric from an upcoming film project by Phelan, which has roots in the poetry of Jean Genet and texts by Samuel Beckett, connecting this installation to a larger body of work.

Alan Phelan holds a Three Year Membership Studio at Temple Bar Gallery + Studios (2016-2019). Recent exhibitions include Lewis Glucksman Gallery, Cork; The Lab, Dublin; and The Hugh Lane, Dublin City Gallery. Forthcoming exhibitions include The RHA, Dublin; Void, Derry, and CCI Paris. He received an Arts Council visual arts bursary in 2017 and the 2019 Creative Award from Meath County Cultural Services funded by Creative Ireland, working with the Dunboyne Flower and Garden Club, which will result in an exhibition at The Dock, Carrick-on-Shannon in November.