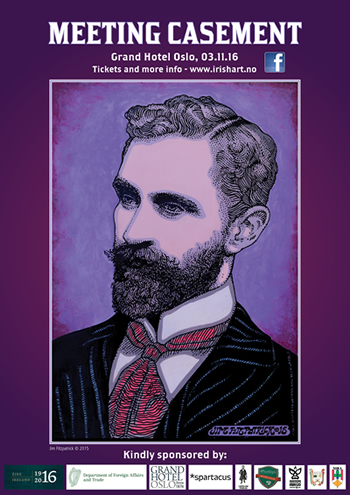 CASEMENT, HIS NORWEGIAN CONNECTION AND THE EASTER RISING
Presented by historian and author Bjørn Godøy

Many thanks to our sponsors for Meeting Casement Bergen:

Born in Dublin in 1864, Casement served as a distinguished British Consul in Mozambique, Angola, the Congo Free State and Brazil. Described by a number of international academics as “having a good claim to be the father of twentieth-century human rights investigation”, he was honoured in 1905 for the Casement Report on abuses of native workers in the Congo Free State and was awarded a knighthood in 1911 for his important investigations on human rights abuses in the Putumayo region of Peru.

Casement’s disillusionment with imperialism led to his involvement with Irish nationalism and the struggle for independence. In 1914 he travelled from New York to Berlin via Christiania, as Oslo was then called, in order to secure German support for an armed uprising in Ireland. Travelling under the assumed name of James E. Landy, he stayed at the Grand Hotel with his Norwegian travel companion Adler Christensen from the 28th to the 30th of October.

His brief stay in Oslo was marked by high intrigue in what is referred to as the Findlay Affair. According to Casement’s version, Christensen was brought to the British Legation where he was offered a large cash bribe if Casement was “knocked on the head”. In contrast, British Secret Service papers claimed that it was Adler Christensen who made the approach and “implied that their relationship was of an unnatural nature and consequently he had great power over this man”. This may have provided London with the first intimation that Casement was homosexual.

Casement met with limited success in Germany and returned to Ireland by German submarine just before the Easter Rising in April 1916. He was captured almost immediately by British military forces. A shipment of arms for the rebellion followed the next day on a German cargo vessel disguised as Norwegian, but was sank by its captain to avoid capture.

Extracts from his diaries, detailing his homosexual activity, were circulated by British intelligence during his trial for treason in order to undermine support for Casement. He was executed on 3 August 1916 and was buried in an unmarked grave at Pentoville Prison. In 1965 his remains were repatriated to Ireland and were afforded a state funeral with full military honours.

Bjørn is a well-known Norwegian writer and historian. He was nominated for the National Book award in 2014. His talk will make special mention of Casement’s stay at the Grand Hotel in 1914 and the high intrigue of the resulting Findaly Affair.

His most recent book Dobbeltspill (Double Game) was published by Spartacus in September 2016 and focuses on the relationship between Roger Casement and his Norwegian companion from Moss, Adler Christensen. Dobbeltspill explores the improbable relationship between Irish revolutionary hero Roger Casement and his Norwegian friend and lover, Eivind Adler Christensen. As World War 1 raged, the two set off for Germany where Casement planned to gather the government’s support for Irish separatism. Within weeks, Christensen went from a ragged existence as an unemployed sailor to becoming a key player in Casement’s vendetta against the British Empire.

About Eye – Witness – Casement
August 1916: On the eve of his trial for treason, a reluctant Roger Casement is persuaded by his defense counsel to revisit his famous “Congo Report” of thirteen years earlier. A damning indictment of atrocities carried out in Africa by agents of the corrupt King Leopold of Belgium, the report had elevated Casement to the status of hero in liberal England. Rehearsing it now might be helpful to his case. From his clammy cell, the doomed prisoner recalls the sub-tropical settlements of the Upper Congo River where he gave voice to men, women and children suffering torture and genocide at the hands of plundering invaders. But that voyage of witness led in time to Casement’s questioning of even the so-called progressive ‘civilizing’ values of the British Empire on whose consular missions he faithfully served. The long night spent re-living his celebrated hour as the father of modern human rights advocacy leads to a cold dawn where he faces the inevitable fate of the liberal witness who has turned revolutionary activist.

About Declan
Declan is a freelance theatre director, performer and writer with over 25 years’ experience in the Irish theatre scene.
His dramatic presentation, Eye – Witness – Casement draws on two books as key sources – The Eyes of Another Race: Roger Casement’s Congo Report and 1903 Diary edited by Seamas O Siochain and Michael O’Sullivan and Imperialist, Rebel, Revolutionary by Seamas O Siochain

About Our Kind
Our Kind imagines a future for Roger Casement had he not been executed in 1916. This film is set 25 years later in 1941, where Casement is in exile in Norway with his former manservant and now partner Adler Christensen. As the story unfolds those closest to him betray their relationships with him, paralleling Casement’s isolation from his homeland, beliefs and the ideals of the Rising.

This is a deliberate challenge to audiences and the prevailing 1916 narrative as Casement is not presented as hero or icon; neither liberated nor closeted. Instead we encounter Casement as an ordinary human being with ordinary human needs, emotions, and failings.

About Alan
Alan studied at Dublin City University and Rochester Institute of Technology, New York. His practice involves the production of objects, participatory projects, curating and writing. These all inform, combine and contribute to an interest in the narrative potential surrounding an artwork. This can be exploited or explored from actual and historical events, ideas, things and places as well as their fictional counterparts. Working in the museum and archive sector has shaped this approach somewhat but more as a counterpoint than agency.

Alan Phelan’s short film Our Kind was commissioned by Dublin City Gallery, The Hugh Lane as part of their 1916-2016 Centenary Programme. Most of the exterior shots were filmed in the Hardangerfjord region in January 2016. The film won the Hotron Éigse Art Prize at the Carlow Arts Festival this year.

About CASEMENT: British Consul – Humanitarian – Irish Revolutionary
Sir Roger Casement: Irish patriot, anti-slavery campaigner, homosexual, traitor… This challenging play offers a unique insight into the inner life of one of history’s more complicated figures. A monologue in two acts, Casement is set in Lisbon, a city that served as a way-station during the journeys undertaken by the real-life Casement for his work in Portuguese Africa and Brazil. In the first act, he is returning from the Congo, where his experiences while writing the famous report on atrocities committed against workers in the rubber plantations have initiated a change in his political awareness — a nascent anti-colonialism. The second act, which takes place on his return journey from investigating further acts of violence against plantation workers in Peru several years later, shows the development of his thoughts, allowing us to connect a radicalizing Irish nationalism to the personal story of a man out of synch with his times.

About Bartholomew
Bartholomew was born in Dublin. His ‘questing’ spirit has led him to embrace an itinerant working life as researcher, writer, composer, and musician. Pursuing academic interests in modern philosophy, critical theory and modernist literature, he moved away from Ireland to study in Denmark, Germany, and Portugal, where he currently holds a postdoctoral fellowship at the Universidade Nova de Lisboa. His numerous publications focus especially on Kierkegaard, Nietzsche, Fernando Pessoa, and James Joyce. His scholarly and artistic works orbit around the central motif of ‘transformation,’ which takes into account the masks, journeys and (multiple) identities that define the modern human condition. His first book, Kierkegaard’s Indirect Politics: Interludes with Lukács, Schmitt, Benjamin and Adorno, was published in 2014. He is also the singer-songwriter and guitarist of the evolving international music project ‘The Loafing Heroes’ (http://www.theloafingheroes.com/)who released a successful fifth album entitled The Baron in the Trees in May 2016.