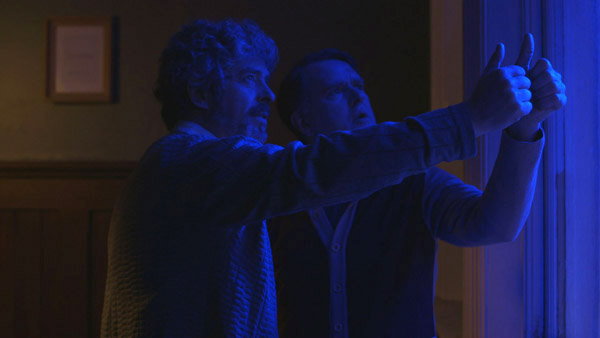 “What is the meaning of it, Watson?” said Holmes solemnly as he laid down the paper. “What object is served by this circle of misery and violence and fear? It must tend to some end, or else our universe is ruled by chance, which is unthinkable.”

The final paragraph from “The Adventure of the Cardboard Box”, a short story by Arthur Conan Doyle, published in 1892.

Detroit Stockholm is pleased to present “if you aren’t all mine”, the first solo exhibition in Sweden by Irish artist Alan Phelan which includes his new 2014 film “Edwart & Arlette”, alongside graphic and text works.

The film is an adaptation of the Sherlock Holmes story “The Adventure of the Cardboard Box” which has been reworked into a stylish whodunit with shot design and dialogue originating from hand photographs collected by the artist from self-harming social networking websites. Words and sentence fragments found on these images were developed into dialogue and remain in the order they were found, forcing the Sherlock narrative to take some unexpected turns. In fact, there is no Sherlock, as his character has been removed. Instead, the central characters are modelled on a photograph of a French art critic and museum curator, doubling up as a gender-shifting brother/sister, with locations merged to make a more succinct yet different story. As in the original tale, murder and unrequited or misunderstood love remain key to the revised plot which is bleakly acted out through hand gestures and attention-seeking garbled dialogue.

Phelan’s work often begins with language – taking a particular text and re-conditioning it for a different context, generating works that occur in a variety of mediums. The transformative trail is often made evident or incorporated into the work – revealing the process, as the artist describes it. The text piece “Morelli Lectures 2014”, on view in the lower gallery, is a developing work which uses the subtitles from the film that inspired the upstairs installation. This text will now form the dialogue for the artist’s next film project which is an imagined future for the Irish humanitarian and nationalist rebel, Roger Casement who was executed in 1916.

Together both galleries interrogate the nature of the narrative in script format, analysing the written word through the post-appropriation technique of re-narrativization. As is often the case with Phelan’s practice, this only encourages conflicting viewpoints through choreographed systems of chance that at random moments move in and out of synch. These fall into the artist’s interest in provisional parataxis, hypothetical intentionalism, and discursive narcissism, which are otherwise only elusive fluxes of memories, shifting identities, open-ended narratives, contrapuntal dialogues, diffused authors, and other circulations.

Sheena Malone is a curator from Ireland. Having completed a masters in Curating Contemporary Art at Stockholm University in 2014, she moved to Berlin where she currently resides. Prior to moving abroad, she spent six years working at The Douglas Hyde Gallery in Dublin where she co-curated the exhibitions ‘Preponderance of the Small’ and ‘Holding Together’. Recent projects include ‘Happy Thoughts!’ with Joanne Grüne-Yanoff, Detroit Stockholm & Titwrench Festival; ‘The S.I. Witkiewicz Portrait Painting Firm’, English Theatre Berlin and Absolut Fringe Dublin; ‘Sister Cities’, Detroit Stockholm; ‘Between Worlds’, Stockholm University, and ‘In Dreams Awake’, Finspång Kulturhuset. Her exhibition proposal ‘Ghosts of a Forgotten Future’ reached the Top 10 of the ApexArt Franchise Program 2014.

If you would like to obtain extra press information for the exhibition or to arrange a viewing outside of regular opening hours, please contact Sheena Malone by email: sheenamalone@hotmail.com

We are grateful for the financial support of the Embassy of Ireland in Sweden and The Arts Council / An Chomhairle Ealaíon.

We would also like to thank Golden Thread Gallery, Belfast for their kind support of the exhibition.