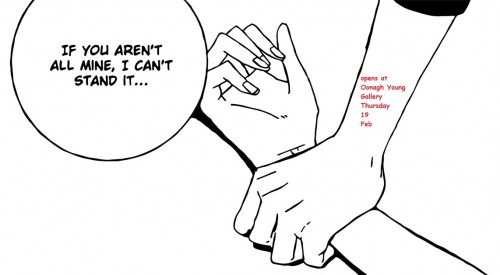 Oonagh Young Gallery presents “if you aren’t all mine”, the second solo exhibition in the gallery by Alan Phelan. The show will be the first Dublin presentation of his 2014 film “Edwart & Arlette”, after exhibitions of the work in Belfast, Stockholm and Treignac, France; as well as the prestigious Bonn Kunstmuseum “Videonale.15” which opens later this month.

Probably the biggest shift is the removal of the Sherlock Holmes character entirely. The audience now must piece together the evidence presented, a play on the detective quandaries of much contemporary conceptual art with its tendency to present riddles. Instead, the central characters are modelled on a photograph of a French art critic and museum curator, doubling up as a gender-shifting brother/sister, with locations merged to make a more succinct yet different story. As in the original Conan Doyle text, murder and unrequited or misunderstood love remain key to the revised plot which is bleakly acted out through hand gestures and attention-seeking garbled dialogue. Irish actor Andrew Bennett puts in a remarkable performance as Edwart Vignot/Jim Browner as does Mikel Murfi as Arlette Sérullaz/Sam Cushing.

The installation of the film in the gallery is within a series of fabric hangings, resembling a staggered clothes line of sheets, in this case sail cloth which acts as a perfect projection material. The reference here comes from a different source, the Michael Haneke TV film 1984 “Wer war Edgar Allan” which informed much of the installations and layouts of the film and accompanying sculptures when first shown at Golden Thread Gallery Belfast last year. The Haneke film is a semi-hallucinatory story of an art student in Venice during a drug fuelled stay. In searching out and possibly murdering an Edgar Allen character, both drug dealer and cafe acquaintance, he follows Allen in one scene through the rows of washing hanging in the alleyways of the city.

Overall the work interrogates the nature of the narrative in script format, analysing the written word through the post-appropriation technique of re-narrativization. As is often the case with Phelan’s practice, this only encourages conflicting viewpoints through choreographed systems of chance that, at random moments, move in and out of synch. Like many artists of his generation he has embraced the hybridity and all-consuming nature of the internet to extract his own story, one that pushes the original away, yet rooted still in the ‘copy and paste’ culture that surrounds us.