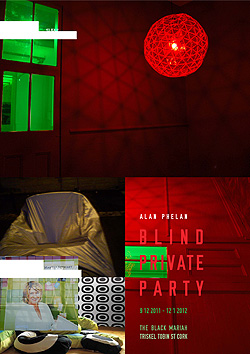 Obviously this is not a party, it’s an exhibition. The show is a selection of videos, fabric pieces, and sculptures gathered from different projects and places made over the last few years. While there should not be any connection between the pieces they actually cohere. As with many recent exhibitions of his work, Phelan has combined contrasting works to re-narrativise them, using old and new pieces to chart out another story, in this case a party of objects, blinded by ego.

There is always a mix several references with Phelan’s work, not just a semantic play, but proposing conflicts between given understandings and interpretations. This is an attempt to undermine the certainty of cultural assumptions through what has been termed as an “infrastructural aesthetic”. This concept allows for several parallel narratives to exist, linking the physical to the political to the societal to the individual. Visually the starting point is civil engineering, re-routed with unlikely content and materials. As with much of Phelan’s work there is an attention to detail and uncommon use of materials which constant shifts the viewer back onto the artwork.

The works in the show are therefore eclectic so as to reflect a complex reality of contemporary life [in Ireland] via the man behind our bankrupt economy, an overarching utopian failed fantasy, an emasculated super hero, a misogynist secret camera, the questionable futility of protest, engineering as non-functional decoration, and a
fascination with assholes.

In association with Crawford College of Art and Design, Alan will deliver a lecture on his recent projects and exhibitions at CCAD, Sharman Crawford Street, Cork, beginning at 12.30pm on Thursday Dec 8. All are welcome.

Alan Phelan (b. 1968 Dublin. Lives and works in Dublin, Ireland)  studied at Dublin City University, Dublin, 1989 and Rochester  Institute of Technology, New York, 1994. In Ireland he has exhibited widely including the Irish Museum of Modern Art, mother’s tankstation, Dublin; MCAC, Portadown; Limerick City Gallery of Art, and Solstice Arts Centre, Navan. Internationally he has exhibited in Oksasenkatu 11, Helsinki; Mina Dresden Gallery, San Francisco; Cabinet, New York; Chapter, Cardiff, Whitney Museum of American Art, New York; SKUC, Ljubljana; Feinkost, Berlin; SKC, Belgrade and other venues in Denmark, USA, UK, and Holland. He was editor/curator for Printed Project, issue five, launched at the 51st Venice Biennale, and has curated exhibitions at the Royal Hibernian Academy, Dublin, Project Arts Centre, Dublin, and Rochester, New York. Phelan was short-listed for the AIB Art Prize in 2007 for his work on the IMMA commission, Goran’s Stealth Yugo, 2009. He has completed several public art projects in Ireland, Wales and New York including projects for Dublin City Council, Dun Laoghaire Rathdown and the Department of Communications. His work is represented in the collections of the Irish Museum of Modern Art, Limerick City Gallery of Art, The National Self-Portrait Collection and several private collections.