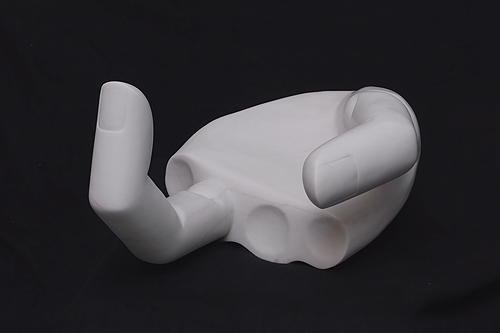 Fragile Absolutes presents 16 new and recent works inspired by Irish artist Alan Phelan’s ongoing engagement with political history, cultural theory, popular culture, masculinity and modified cars. The titles, subtitles and structure of the exhibition are derived from a project Phelan completed during his time on IMMA’s Artists’ Residency Programme in 2008. Taking the italicised words from the Slavoj Žižek book The Fragile Absolute – or, why is the Christian legacy worth fighting for? and using them as random word associations towards 15 ideas for works, now realised in a variety of materials and processes, from hand-carved marble, through to video and papier-mâché sculptures. The works in the exhibition traverse numerous sources and time periods, from current affairs, popular fiction, boy racers, nationalist heroes, world war, economics, psychoanalysis and globalisation. Phelan sets up a complex mix of the literal and metaphorical references, simultaneously providing background information on many of his subjects, yet leaving them open to conflicting modes of interpretation.

A new IMMA-commissioned sculpture, Goran’s Stealth Yugo, 2009, created to coincide with the exhibition, is located in the Museum’s Formal Gardens. The new commission began in 2006 during a residency in Belgrade, Serbia, where Phelan collaborated with Goran Krstiæ, a car designer from the Zastava/Yugo car factory in the city of Kragujevac. The work resembles a stage in the design process, where 3d modelling is used to approximate a structural framework for a new car design. This phase has been rendered in chrome-plated steel, supported by extended twin exhaust pipes, attached to an underwater stabilising base. The effect is both dynamic, as the car turns and points into the sky; as well as disguised, with the framework covered in Phelan’s signature fake pine twigs, drawn from the ‘blend-in’ techniques used in the telecommunications industry to hide mobile phone masts (generally as fake trees).

Born in Dublin in 1968, Alan Phelan studied at Dublin City University and Rochester Institute of Technology, New York. He has exhibited widely internationally including Whitney Museum of American Art, New York; SKUC, Ljubljana; Feinkost, Berlin; SKC, Belgrade. In Ireland he has exhibited at mother’s tankstation, Dublin; MCAC, Portadown; Limerick City Gallery of Art, and Solstice Arts Centre, Navan. He was editor/curator for Printed Project, issue 5, launched at the 51st Venice Biennale, and has curated exhibitions at the Royal Hibernian Academy, Dublin, Project Arts Centre, Dublin, and Rochester, New York. Phelan was short-listed for the AIB Art Prize in 2007 for his work on the new commission, Goran’s Stealth Yugo, 2009.

The exhibition is accompanied by a fully illustrated monograph with essays by Seán Kissane, Curator, IMMA; Dušan Bjelic, Professor of Criminology at the University of Southern Maine in Portland, USA; Medb Ruane, writer and journalist, and Tony White, novelist and Leverhulme Trust writer in residence at the UCL School of Slavonic and East European Studies, London.

The exhibition is a collaborative project between three venues with new works and configurations appearing at each. The other venues are Limerick City Gallery of Art in November 2009, and Chapter Arts Centre, Cardiff, Wales, in December 2009.