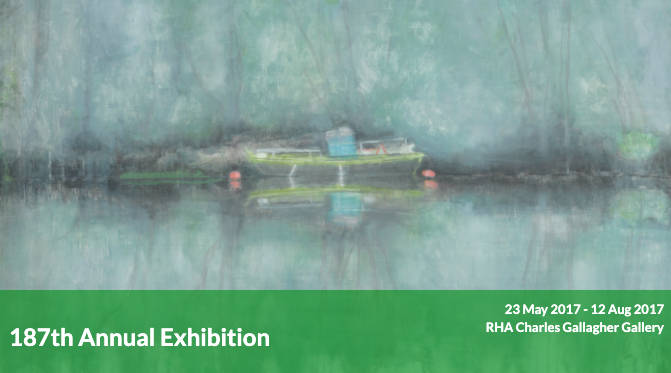 The RHA Annual Exhibition, now in its 187th year, is the most ambitious event in the Academy’s calendar. Ireland’s largest open submission exhibition includes painting, sculpture, print, photography, drawing and architectural models and it brings together the works of RHA Members, invited artists and artists selected from open submission.

This year, the open submissions have provided over half of the exhibition and were rigorously selected by a panel of Academy Members, over a period of 5 days, from a vast number of applicants, which involved over 2,400 artworks.

Two of the major prizes include the RCSI Art Award in association with the Irish Times, an award of €15,000 (€5,000 prize and €10,000 commission) and the Hennessy Craig Scholarship of €10,000 awarded to a painter under the age of 35 exhibiting in the open submission section of the exhibition who has studied at an art college in Ireland. In addition to awarding almost €60,000 in prize funds the Academy also recognises and honours an individual or organisation who have made an outstanding contribution to the visual arts and culture in Ireland, by awarding the RHA Gold Medal. Previous recipients include: Tony Magennis Fine Art Transport & Installation, Cast Bronze Foundry, Gandon Editions, Dr. Nicola Figgis, Prof. Paula Murphy, Carmel Naughton, Prof. James Slevin, Tony Kilduff, Edward Murphy, Gabriel Byrne, Morgan O’Sullivan, Maurice Foley, Dr. Jamshid Mirfenderesky, and Anthony Cronin amongst others. This years recipient will be announced on Varnishing Day, a preview day for exhibiting artists and their families.

Mick O’Dea, President of the RHA explains, “Every work exhibited in the RHA Annual is fresh from the studios and workshops of Ireland and Europe and has not been viewed before. If you want to have your finger on the pulse of what Ireland is about, you cannot get the full picture without seeing the RHA Annual Exhibition. It offers an unrivalled opportunity for the new and experienced collector as each piece has had a 1 in 10 chance of being selected through the open submission process. Here you will have the opportunity to see work by emerging artists, who in some cases have not shown in an established gallery before, hanging side by side with established artists who have a distinguished lifetime of work behind them. The democracy of this open submission process is a core decree of the Academy.”

This year will also see a new site-specific work by Miranda Blennerhassett installed in the RHA north stair. This work titled RHA examines the relationship between pattern and architecture. Working with a design that comes from the brickwork of an Iranian mosque the piece examines the tradition of applying decoration to structure. The act of decorating objects and environments is a fundamental human activity that provides meaning and value wherever it is placed. It is an action that connects all cultures and classes. This simplistic repeat pattern has been used in a range of domestic applications such as quilts, weaving, tiling, mosaics, etc. and references the way geometric forms can be adapted by craftspeople in a desire to humanise their surroundings.

Admission is free and the exhibition is supported by a full colour catalogue costing €20.